0
was successfully added to your cart.

Thursday evening at the Inn was one of reminiscing about days of yore, particularly around football and fishing. Football was high on the topics of conversations especially if you get a couple of guys in their mid to late fifties are around the current generation of players. The upcoming event of Oliver’s wedding brought in not a few bods from the south end of Skye. Not quite up on who is who but conversations quickly went on to the standard and quality of the local football leagues thirty-five years ago to how they compare with now. I spent most of my growing up in Kyle playing, practising (I needed to) and spending time down at Douglas Park in Kyle. When not good enough to play for Kyle I played for Balmore and Plockton, there being slightly less competition for places. Vague memories of being in the winning team of Balmore winning the Macleod cup, their only winning trophy as their team members drifted back to their native villages. There were the traditional “old firm” matches of Kyle/Plockton which was replaced by the Kyle/Kyleakin games. I think Plockton faded a bit as the Byrnes, Finlaysons and Hays were not replaced in sufficient numbers. Good to chat with Chris and remember incidents of yore, no big-headed stuff but lots of banter. Makes you think, the Kyle defence of D.Anderson, S.Moore, I.Munro, A Macleod, D.Macleod and S.Barckley, was part of a team that almost won the “grand slam” missing out on only one of the available trophies. Sad to think that two members of that group are no longer with us but good memories all round and we were probably not better than today’s players.

Fishing was another topic when I came across Will who was on board the Kyleakin ring netters. Seems he has done a study of the ringnet and has numerous photos of the boats including the Mary Ann BRD 423 that my dad was on. There was a bit of confusion as we sorted out which Macleods were which as there were three altogether on the fishing boat. I am pretty sure that the photo is one of Will’s and she laying at Canna.

Remember he did say that Canna was part of his research. It certainly of a bygone era. Chris also mentioned that he remembers the day when the Fortitude came to Kyleakin. That would have been a big day for the village, seeing a new boat arriving in the small port. So it was certainly an evening of memories both on and off the pitch. All this going on and a family I have got to know over the recent years, the Boyds from Lewes, were in for their “last supper”. You make good friends working at the Inn and I was fortunate to get off a little earlier on Wednesday evening to catch up with them as they were staying down at Pier Cottage. Dougal and Eilidh were impressively well-behaved during the late night visit.

The week has had its usual rendition of fishing

and working at the Inn with a blip at the Turbine to sort out. It is off just now as we have not had any rain for quite a few days. The predicted snowfall has not hit Applecross and there was enough sunshine for the wedding to be enjoyed by all including Son No3 who had come home for it. The 150,000 kWs is on target for the projected income so a dry spell is welcome at this time of year. Lambing is going full pelt so it is inevitable that we have some snow flurries although with the wind in the east to north east the sunsets have been okay.

There was a breeze from the east forecast on Monday and as the day was bright and rumours of adverts being filmed on the Hill I took the dogs up for a wee look. 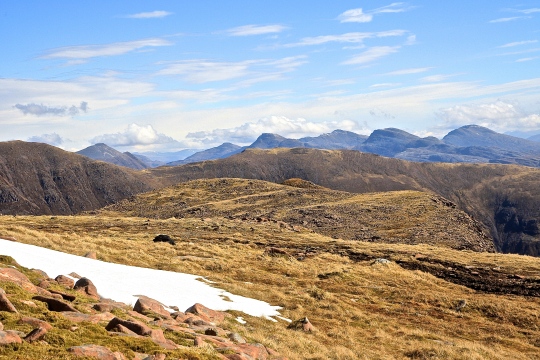 Ended up walking to the mast and enjoying the views from all quarters.

There is a spate of people using and wanting to use the Bealach these days, whether for tourists, cycle sport ifs, car clubs and filming and one wonders where it will end up. Road closures, if only happening once or twice a year can be met with a shrug of the shoulders but as there is more and more demand for its usage which includes closures it is little wonder that this is a topic that is now coming up in our Community Council Meetings. There is little direct benefit from all this activity to Applecross and the road is deteriorating fast with small prospect of much money being spent on it. Maybe if HC put some of their monies offshore they would have some to spare to spend on the Bealach. No wonder however that there are so many who want to drive over the Hill.

are at the top end.

We love the wilderness, but we like the mod-cons, comfort and convenience too.
Book your stay today.

BBC News Feature: Applecross aims to be self sufficient

BBC News Feature: Applecross aims to be self sufficient